Why are children at conferences such an important issue?

It is well known that women are disadvantaged at conferences. Women are generally underrepresented at academic meetings, and research has shown that they are less likely to be invited speakers and in other positions of leadership such as chairing sessions, due to their inaccessibility into men’s research networks.

Recently I have seen an increasing number of stories and comments about the problems that caregivers face when going to academic meetings, and some suggestions to create opportunities for caregivers to attend local and international conferences. Clearly accessibility of conferences is an equity issue, with the ‘burden’ of childcare often falling on women. You may find that your parental leave is over (if you are in a country or institution that has maternity leave), however, it remains very difficult for caregivers to leave their infants and children until they are older. Being unable to attend conferences is extremely disadvantageous for women in their academic progression. Conferences are a way to promote your research, to get feedback on your work, to explore the latest advances in the field, and most importantly to engage with colleagues and form relationships that can often lead to collaborations and other research and service opportunities.

Although this equity issue is becoming more visible, in reality, we have a long way to go to break down the barriers for caregivers to attend conferences.

The best conference attendance with one of my children was a small Wenner-Gren supported workshop on Childhood in the Past held in Galway, Ireland. When I received the invitation to be a participant I told the organisers that I was expecting a baby in three months time and she would be 6 months old when the conference came around. This was no issue and the workshop organisers were very supportive.

Logistically and financially conferences are very difficult for caregivers. In my excitement on the invitation to the Wenner-Gren workshop I didn’t quite remember the challenges I had traveling with the first baby on my own. It was a total of 45 hours of travel from New Zealand to Ireland, with about 30 hours being in the air. Unfortunately, Emirates did not seem to give preference to babies being in the seats that bassinets can be attached, and for some reason unbeknown to me the travel agent had not requested that seat, and I was told at check-in that these were not available to me. At least I had a sling that my baby could sleep in on my front. Needless to say I am NEVER flying with Emirates again.

The conference was amazingly inclusive of me my baby. I think this worked for two main reasons: it was small and I could look after her while being in the workshop room with her, and the group of women were all very supportive. 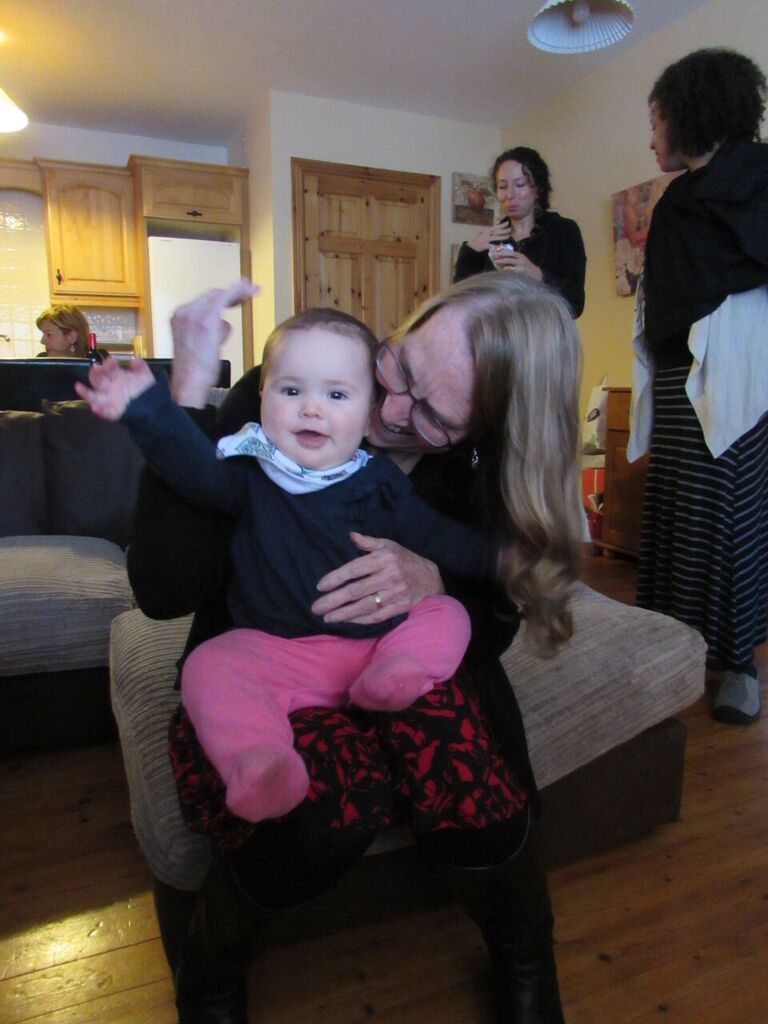 The ‘grandmother’ of the Archaeology of Childhood, Kathryn Kamp, with my daughter at the Wenner-Gren Workshop, Ireland, October 2014, photo courtesy Jaime Koshyk

When my youngest daughter was about 12 weeks old I attended the inaugural Early Career Meeting and workshops organised by the New Zealand Royal Society in Wellington, about a 2 hour flight from my hometown. Personally I gained got a lot out of the conference through the interactive workshops and discussions. I must admit that during the keynotes and lectures when the baby was awake I spent a lot of time standing in the corridor peaking through the backdoor of the conference room swaying a windy and unsettled baby. Other than one well-known woman in the New Zealand science community who approached me and gave her form of ‘support’ by simply saying “well done” and walking off, what struck me was that during all the workshops we had on mentoring, research development, and the research journey, with prominent people talking about women in science and academia in general, it was only at the end of the second day that one of the speakers dared to talk about the “Elephant in the Room” and referred to the baby in the audience. This woman talked about her “broken career” with multiple maternity absences and childcare responsibilities and the obstacles that this posed for her, including the fact that she didn’t have a chance to attend many conferences for years.

Traveling and attending conferences is hard with children and it is a gender equity issue that isn’t recognised enough. Although inclusive conferences won’t cause an overall cultural shift in sexism within academia, there are certain ways to lessen this significant obstacle for women and caregivers. Here are some points that conference committees and organisers may consider:

A couple of years ago, I was staying with my eldest daughter who was eight years old in Manchester, UK,  at the recommended conference accommodation, which was a Hall of Residence. After staying there for 2 nights I was told by management that I had to leave as they didn’t allow children in the building due to “safety issues”. I could only find alternative accommodation miles away from the University so I couldn’t interact with any of the other conference goers in the mornings or early evenings and ended up paying over 600 pounds for alternative accommodation and transport to and from the conference. I’ve have, however, had very good experiences at other University Halls. For example, Grey College at Durham University was very accommodating of my daughter and I when I stayed there while on a research visit.